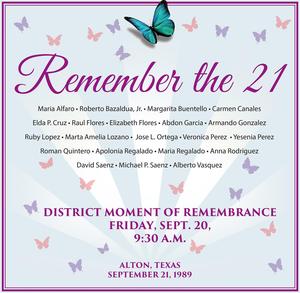 This year marks the 30th anniversary of a school bus accident that claimed the lives of 21 Mission CISD junior high and high school students.

Since the anniversary date falls on a Saturday this year, (September 21), Mission CISD is planning a districtwide observance for Friday, September 20. At 9:30 a.m., all district employees and students will be asked to stop what they are doing and join in a moment of remembrance. At this specific time, students and staff can not only reflect on the impact of the accident, but to also use it as a time to individually celebrate the lives of the children, and the positive impact they had on their families and their community before their passing.

In addition to the district-wide moment of remembrance, a small ceremony will be held at Alton Memorial Jr. High School a little earlier the morning on Friday. The school was named in memory of the students killed as a result of the accident that occurred on September 21, 1989.