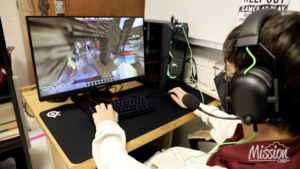 After just one year as a campus club, the K. White Jr. High School Esports Club is now ranked second in its league nationwide.

After just one year as a campus club, the K. White Jr. High School Esports Club is now ranked second in its league nationwide.


Esports, which stands for Electronic Sports, is competitive, organized video gaming. During tournaments, dozens of KWJH  Esports club members compete in organized gameplay against other students their age through Generation Esports. Students at KWJH take part in the Minecraft Middle School League in which they competed all season, advanced to playoffs and followed with the national championship.


In their first year as a competitive team, 12 students competed nationally, four made the championship match where two eighth grade students ranked among the top five. Sean Salinas and Nicholas Ochoa placed 2nd and 5th, respectively.


“It's not something I expected in our first year, but now we're number two in the entire country so it's a huge boost to Esports in not only the district, but the entire Rio Grande Valley,” said KWJH Computer Science Teacher and Esports Coach Israel Martinez. “I think with this kind of national recognition, parents are going to see what our District is doing and they're going to want to send their kids here.I do think Mission CISD is in the front lines of this so the future is bright here for Esports.”


Esports has been a fast-growing international phenomenon with more than 175 colleges and universities now members of the National Association of Collegiate Esports that also offer officially recognized varsity esports programs and athletic scholarships.


For Salinas, who nearly fell off his chair after he was informed he had been ranked second in the nation, being able to accomplish this feat with the support of his campus made the hard work worth it.


“About 200 people around the world in junior high competed and for two people from my campus to have placed and me being one of them, it’s just incredible to me,” he said.

Ochoa says his favorite part about Esports is being able to strengthen his strategy and communication skills.


“It’s really fun and I do recommend that more campuses and students should take advantage of it,” the 8th grade student said.


In the end, Martinez says that it’s the parents he has to thank for their support of this accomplishment.


“The parents have really been on board with this, so to the students and the parents who helped make this possible, it's amazing,” he said. “It makes us look good, it makes them look good and I can't say enough about their support,”