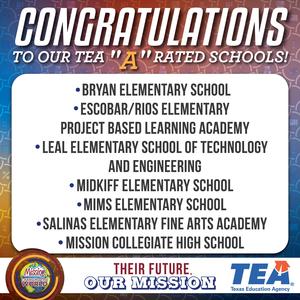 Seven schools in Mission CISD have earned an “A” rating in the agency’s A-F rating scale.

Mission, Texas- The Texas Education Agency (TEA) has released its first accountability ratings since 2019 due to COVID-19 related issues.

“I am exceedingly proud of the resilience shown by our students and staff,” explained Dr. Carol G. Perez, superintendent. “We knew there would be some challenges as we emerged from the disrupted learning. We still have some improvements to make, but we are well on our way.”

Overall, Mission CISD earned a “B” rating, missing the highest rating by just one point in the TEA rating scale.