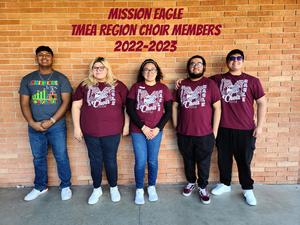 Five have earned places in the TMEA Region Choir with one also earning the right to compete for a place in the TMEA State Choir on January 7th.

Damian Perez will not only perform with the Region Choir but will audition for the TMEA State Choir.

Other Eagle Choir members making the TMEA Region Choir are: Josue Nunez, Karen Mendoza, Daniella Escojido, Jose Fuentes-Morales. Escojido and Perez advanced to the Pre-Area or earned places as alternates with Perez ultimately advancing to compete for the state choir.