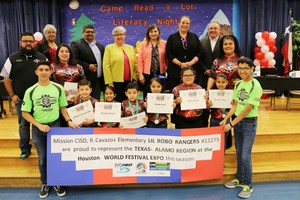 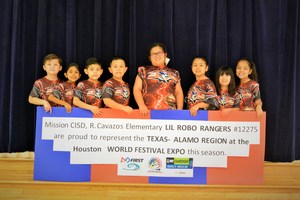 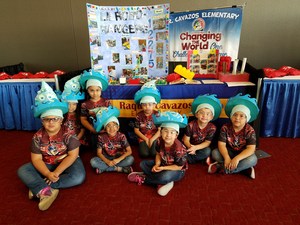 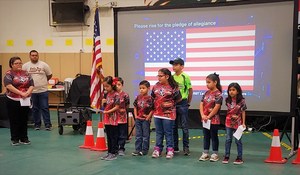 LiL Robo-Rangers making huge strides in their first year as rookies. They are currently participating in the 2018 FIRST World Championship & World Festival in Houston April 18-21, 2018.

In this year’s 2018 theme challenge entitled “Aqua Adventure” students were given a task to learn about our water system. Students researched how the water system gets cleaned out and how it makes its way into our homes. It consisted of three major parts EXPLORE, CREATE, and SHARE.

EXPLORE – students visited with their local water plant early in the school year to learn of the main water sources in their community and how water gets throughout the city from the water plant. Students then explored the procedures of water going through the entire city plant before it gets to their homes. The LiL Robo-Rangers visited with our local City of Mission Water Supply Supervisor Mr. Olvera. The team of students toured the City of Mission water plant and were educated in the different steps of the water cleaning process. Students then had to go back and add the information they collected into the Challenge notebook.

CREATE - after students did the research on the water process they had to go back into the classroom and brainstorm ideas of how they could save water. They used the LEGO WeDo 2.0 Kit to come up with a mechanical model made of entirely LEGOs. They learned to program with LEGO WeDo 2.0 software and created their “Cavazos Challenger City” focusing on a water tower that dispersed water every hour at the hour. This allowed all the students to control the water supply and save as much water as possible.

SHARE - once the students explored and created their model, they shared their project with fellow peers by attending FLL JR expos. Their FIRST LEGO League Jr. model was presented at the FIRST-RGV FTC League Championship held in Alton, TX, at the Dallas Forth Worth FLL Jr Expo, and at the FIRST-RGV FLL Jr Regional event. The team shared and presented the “Show Me” poster with pictures and explanations of their LEGO robot model and design.

At such a very young age, The LiL Robo-Rangers have already started making a name for themselves. They conducted a Show and Tell Demo during the FTC Bell Metro League Meet 3 where they spoke to elementary and high school principals, coordinators from different districts, students, and parents.

They were also asked by FIRST RGV to participate in the opening ceremony for the TESLA & BELL Metro League Championship where several Mission CISD schools competed alongside schools from all over the Valley. The team received their first-ever award, “The Great Journey Award” for the Best Documentation of their Aqua Adventure.

The LiL Robo-Rangers Challengers received an invitation in March from the Alamo Region to represent their FIRST League Jr because they clearly embodied what the program is aspiring too. The team was involved in community service projects like Hurricane Harvey Relief and they are also the youngest ambassadors of the FLL Jr. program in South Texas.

The LiL Robo-Rangers have clearly made history by setting a path for future FLL Jr teams in Mission CISD, the Rio Grande Valley, the FIRST Alamo region, and teams from all of FIRST in Texas. This week they are currently, competing at the 2018 FIRST World Championship & World Festival in Houston, TX from April 18 – 21, 2018.